Situated in the north of France, Lille is the fourth largest metropolitan area in the country and the capital of French Flanders. As a major international crossroads, the city is 30 minutes away from Brussels, 60 from Paris and 80 from London by train. It also has easy access to four airports (including Roissy Charles de Gaulle and Brussels' airports). Lille’s own international airport is only 20 minutes away from the historic city center that features a gorgeous blend of French and Flemish architecture. As a flourishing cultural hub, Lille also takes pride in the friendliness of its people and in its thriving culinary scene that includes great local craft beers.

GECCO 2021 will be held at the Lille Grand Palais convention center. It is a convenient 10 minutes walk away from the city center and Lille's 2 train stations. A metro station and public bike station are also nearby. There are over 4000 hotel rooms in the vicinity. The venue has 25 years of experience and welcomes over a million visitors per year. About 300 events are organized there each year, with between 20 and 20,000 attendees. Lille Grand Palais is committed to sustainable development and is a low carbon venue. 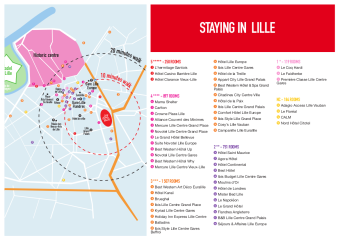